“Bias” is understood as a common word used by American leftists and Democrats to circumvent directly using the term “Critical Race Theory (CRT).”

FCV has received word from a student that a Colloquium instructor taught bias and the Harvard Implicit Association Test as part of the curriculum.

The response from FSU came after FCV brought the issue to light in an email.

“This week, colloquium discussions focused on bias as a very general concept. In a few sections, peer facilitators suggested students could explore the Harvard IAT as an optional activity,” they said.

FSU stated the bias that students were taught about was in regards to things other than race, such as gender, age, and weight.

Honors Colloquium is a required course for Honors students to graduate.

The university claimed that students did not have to share their responses to these questions.

Ernie Sampera, an assistant to Anna Paulina Luna (R), brought the issue to public attention in an October 29th Facebook post, detailing how the quiz is additionally required in many Greek life organizations. 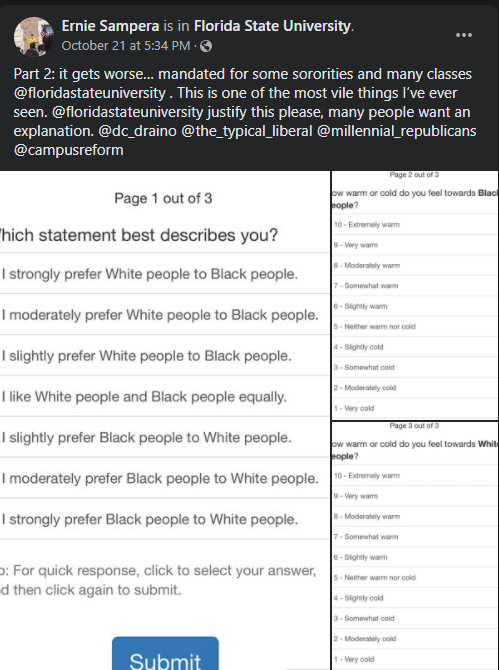 The university’s actions are baffling to many conservatives, especially given the Florida government’s recent bid to ban CRT from being taught in schools.

If a Florida student sees anything that fits this criteria, reach out to FCV, and it will be brought to the public’s attention.

RINOs Are Trying to Take Over the Lee County GOP