Thousands of emails to and from Dr. Anthony Fauci have been released under the Freedom of Information Act (FOIA). One of the emails released was sent to Dr. Fauci on January 31st of 2020 with the subject line “Science: Mining coronavirus genomes for clues to the outbreak’s origins.” 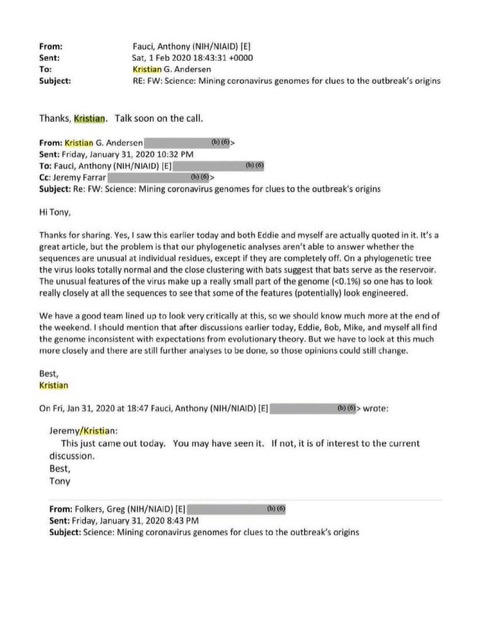 The email is from Kirstian Andersen, a professor in the Department of Immunology and Microbiology at Scripps Research, who writes “The unusual features of the virus make up a really small part of the genome (<0.1%) so one has to look really closely at all the sequences to see that some of the features (potentially) look engineered.” Professor Anderesen goes on to say, “We have a good team lined up to look very critically at this, so we should know much more at the end of the weekend. I should mention that after discussions earlier today, Eddie, Bob, Mike, and myself all find the genome inconsistent with the expectations of evolutionary theory.”

The email indicates that back in January of 2020 Professor Anderson and colleagues believed there was significant evidence to suggest that COVID-19 was not naturally occurring and was instead engineered. However, as early as February of 2020 Dr. Fauci dismissed the ‘Lab Leak Theory’ claiming that this virus was most likely a natural occurrence from the environment.

Just days ago in the United States Appropriations Committee hearing on NIH funding for gain of function research Senator Marco Rubio when questioning Dr. Fauci said, “SARS we knew the host in 4 months. MERS we knew the host in 9. We still don’t know the host for COVID even though China has a vested interest in producing the host. In a lab that we know is involved in changing viruses synthetically so that they become infectious for humans. In a lab that diplomats have told us is unsafe. In a country with a history of lab leaks and by the way in a virus that we know can be synthetically created because the Swiss did it.” Senator Rubio went on to ask, “All these facts were available to us last April, I’ll start with Dr. Fauci, why did you dismiss the lab leak theory as credible?”

Dr. Fauci responded to Senator Rubio’s question saying, “I have always said that the high likelihood is that this is a natural occurrence. I didn’t dismiss anything.” However, after the FOIA released this email (above) we now know that Dr. Fauci had evidence to the contrary as early as January of 2020.

“There are people out there who had Facebook posts taken down, were called kooks and conspiracy theorists for saying publicly a year ago what we now say may be possible. And I believe those people deserve an apology at a minimum.” -Senator Rubio.