Top 10 Republican Candidates for President in 2024 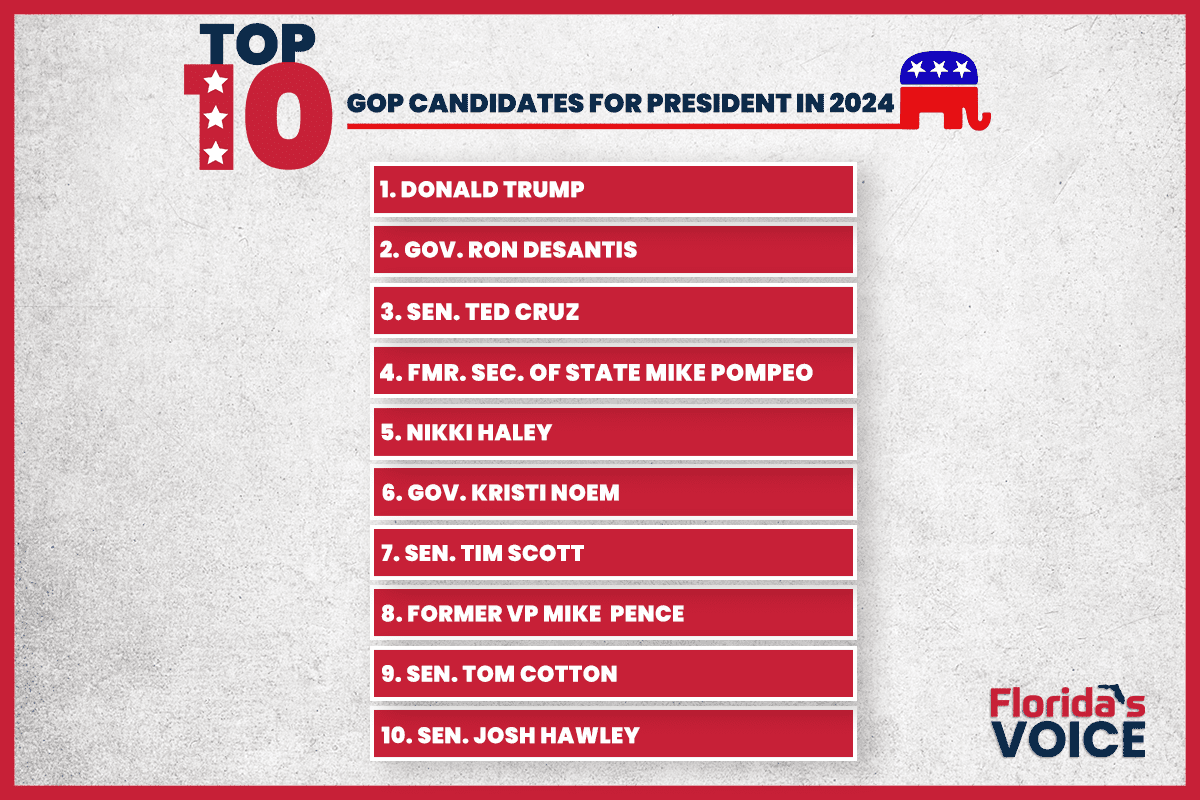 The 2022 midterms are still 6 months away, but shortly after the midterms are when primaries kick into high gear and presidential hopefuls throw their hat into the ring. There are no official announcements from the Republicans on 2024 candidates, only rumblings and mutterings of potential candidates.

Below are the top 10 candidates as of May 2022 too look out for as contenders for the nomination.

Hawley is a current U.S. Senator from Missouri. Although not a particularly large or influential state, Hawley has long been a outspoken critic of Democrat shenanigans and recently went after the Biden Administration for its “censorship” by forming a new Disinformation Governance Board.

Cotton, a U.S. Senator from another smaller state, Arkansas, is broadly outspoke like his fellow Senator Hawley. He is regularly under fire from left-wing media figures and was criticized for trying to stonewall President Joe Biden’s U.S. attorney and marshal nominations.

Former Vice President Mike Pence had a strong performance during the Vice Presidential Debates in 2020 against Vice President Kamala Harris, but his opinion turned sour for many conservatives and Trump supporters when he did not object to the Electoral College votes after the election.

However, Trump recently endorsed Rep. Greg Pence for re-election, showing a devotion from Trump to broader strategy over a potential grudge.

Scott, a current U.S. Senator, is a well-known conservative from South Carolina and was appointed to the Senate by Gov. Nikki Haley in 2013.

Scott is another outspoken conservative figure and is receiving praise from conservatives wanting an alternative to Donald Trump, with a new The Hill opinion column supporting Gov. Ron DeSantis of Florida and Sen. Scott as a presidential ticket.

South Dakota Gov. Noem is under fire from an ethics board in her home state, but she’s been a prominent, Trump-supporting conservative since she was elected and inaugurated in 2019 alongside DeSantis.

Pompeo was a businessman. For Trump, he was the CIA Director (2017-2018) and Secretary of State (2018-2021), serving for Trump his entire term. Even Washington Post has acknowledged his potential to throw the hat into the ring. Pompeo is a strong voice against the Chinese Communist Party and is sending out a new book this fall.

Cruz is a U.S. Senator from Texas and he hosts his own podcast, Verdict with Ted Cruz, with The Daily Wire’s Michael Knowles. Cruz ran for President in 2016 but dropped out during the primaries.

Trump and Cruz have a mixed history: Trump nicknamed Cruz “Lyin’ Ted” during the primaries, but endorsed his election in 2018. Cruz still supports Trump publicly.

DeSantis’ latest win is bolstering enthusiasm even more, with his dismantling of Disney’s Reedy Creek Improvement District, removing legal protections in Big Tech legislation for theme parks, and passing a new redistricting map that heavily favors the GOP despite being less gerrymandered.

The Former President is a clear frontrunner and would likely clinch the nomination if he chose to run. He garnered 59% of the CPAC straw poll vote, but a considerable percent more said they would back him if he were the nominee.

Recently, Trump got active on Truth Social after Elon Musk purchased Twitter. Trump hosts regular campaign-style rallies where he outlines his ‘platform’ and hints at running another campaign. Trump has a war-chest of over $100 million, before any sort of 2024 election season has even begun, pointing to a strong likelihood he announces after a 2022 red wave.