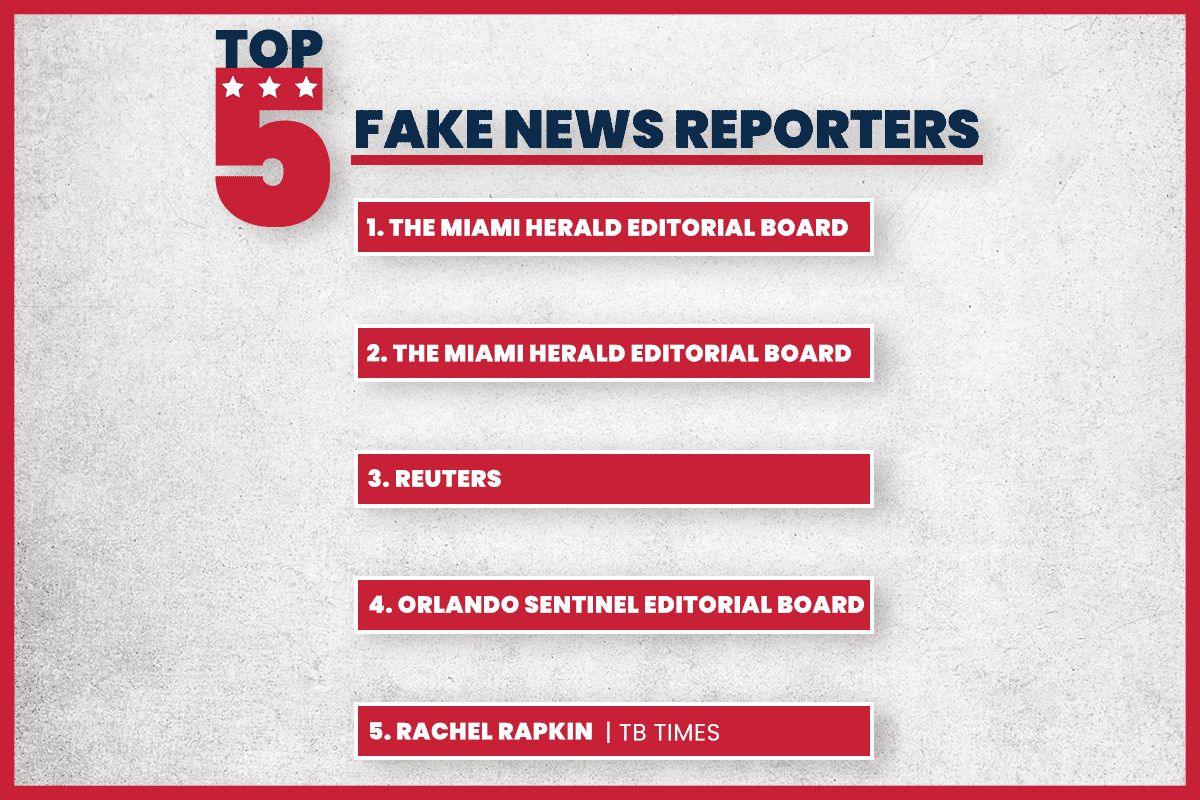 Florida’s Voice Presents Florida’s Top 5 Fake News Reporters of the Week: Every week, FLV will rank the worst reporters covering Florida politics. Our team, and readers, have noticed a stark uptick of fake news “journalists” that are consistently lying or misleading the public on Florida affairs in politics, ranging from Governor Ron DeSantis to COVID-19. In an effort to promote more journalistic integrity, these individuals will be cited for their attempts to mislead the public

Eric Daugherty contributed to this report.

Rachel Rapkin writes that Florida is not the “freest” state in America because Governor DeSantis and other Republicans are anti-abortion. DeSantis has called Florida a free state because of his anti-lockdown approach during the pandemic. But Rapkin claims that being anti-abortion tells people what they can’t do with their bodies, and is therefore the state is not advocating for freedom.

But what Republicans argue is that anti-abortion legislation gives the innocent baby freedom to live. Let’s also look at states like California and New York with strong pro-abortion legislation. Those states were the opposite of free. They controlled whether a business could remain open and required people receive COVID shots, leading many of those to move to the free state of Florida.

The Orlando Sentinel Editorial Board claims that Florida Republican’s crack down on Critical Race Theory in schools is not about protecting students from indoctrination. The piece says they are “hiding relevant information” from students.

While CRT may be relevant in today’s society, it is extremely controversial. Governor DeSantis makes the argument that relevancy does not mean students should be taught that a student’s moral character is determined by their skin color or sex. Republicans are trying to protect students from feeling they are inherently oppressed or inherently an oppressor just because of their skin color. It’s a theory they say will ultimately lead to divisiveness.

A spokesperson for Gov. Ron DeSantis’ office called out Reuters for quoting only one word out of the office’s five sentence statement. Reuters published a story about a U.S. appeals court rejecting most of Florida’s social media law.

DeSantis’ office provided a statement explaining why they disagreed with the court’s decision, but Reuters only included that the office called the decision “stupefying.”

2. The Miami Herald Editorial Board

Miami Herald is back on the list. This time the board called State Rep. Randy Fine’s tweet a “threat” against President Biden and called on the Secret Service to investigate. Fine tweeted after President Biden urged for more gun laws and cracking down on “assault weapons” just hours after the Texas elementary school shooting.

What the Miami Herald fails to mention is Fine’s very lengthy explanation on how the Second Amendment is meant to protect from an “overarching” government like administrations that mention banning types of guns.

1. The Miami Herald Editorial Board

The editorial board at the Miami Herald has long-time criticized the DeSantis administration for discrediting Rebekah Jones who falsely claimed Florida Department of Health officials pressured her to manipulate coronavirus numbers.

The Miami Herald editorial called Jones’ whistleblower win against the DeSantis administration “a win for all of us” in June of 2021. But a new report by the inspector general shows Jones made “unsubstantiated” claims against the DeSantis administration. The report also “exonerated” department officials accused of wrongdoing. Where is the Miami Herald Editorial Board now?